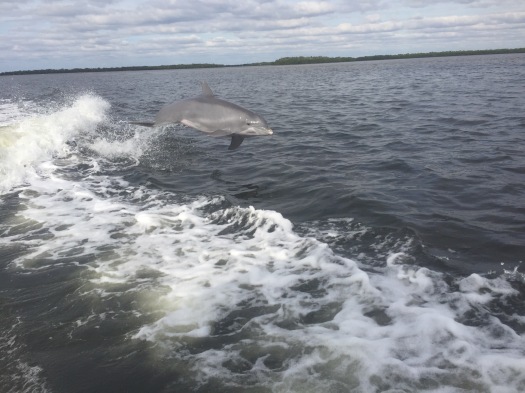 I already noted that this Christmas has been unlike any Christmas I’ve ever experienced. One of the biggest changes was not hosting at my home in wintery New England. Instead, my husband, two of my children, and my brother have come to Florida to celebrate at my parents’ new home.

I will admit to feeling a bit unrooted by this.

After Christmas breakfast–outside, on the lanai–we went for a boat ride. As we left the canal and entered the bay, my brother spotted a dolphin. We watched it breach the water and then swim alongside the boat. So nifty.

Then suddenly, we were surrounded by dolphins. We had cruised into a pod of at least eight young ones. My Mama noted that they must have known that “they have the day off of school” and were out to play. They seemed to be racing one another. Before we knew it, they were leaping and diving and flipping, playing in the wake of our boat. None of us, not even my folks, had ever experienced anything like this. It was the very illustration of “glee.”

And in that moment, I knew that we would all be able to create new traditions, and find new joys in the season.